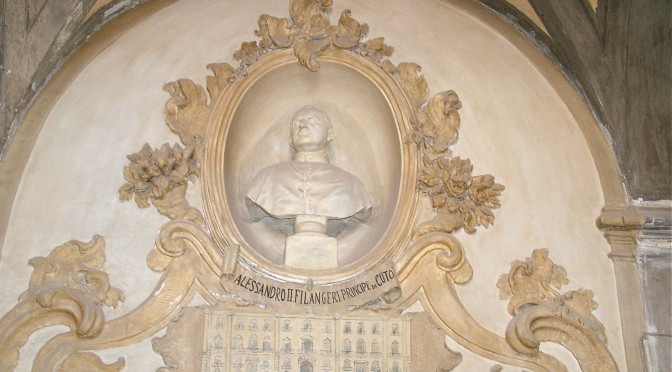 Alessandro Tasca Filangeri – Prince of Cutò was a renowned member of the Sicilian Filangeri dynasty. He was a member of the Italian Socialist Party and on the side of the poor. From the late nineteenth century, he financed and established, among other things, some newspapers with a strong polemical nature, including “The Island” by Napoleon Colajanni, “Gibus” and the sheet socialist “The Battle”, on which he wrote articles vitriol against the powerful Palermo and Sicily.

Because of an article on March 5, 1902 he was arrested on charges of defaming the senator Paterno, former mayor of Palermo. Filangeri said Paterno was corrupt and mismanaged the city.

In prison, the eccentricity of the Prince of Cutò manifested itself in the unique furniture of his cell, embellished with carpets, curtains and paintings from their family mansion. His release was celebrated by the Workers with a sumptuous banquet in his honor. Only after his release from prison in Palermo Ucciardone, the investigation established to verify the allegations that Alessandro Filangeri made against Senator Paterno. This lead to the consequent dissolution of the municipal council of Palermo.

In 1903 he married Marie Thérèse (called Ama) Zakrzewska, by whom he had two sons, Alexander and Joy. Elected to Parliament in 1906, he remained there for sixteen years. After the initial enthusiasm for the current maximalist, over the years in Parliament, came to the reformist ideas.

In the same year he joined the Freemasonry of the Palazzo Giustiniani .Despite his constant care for the weak and the humble, loved to go to the aristocratic circles, including the Bellini in Palermo. His dual nature of aristocratic and convinced militant socialist earned him the nickname “Red Prince”, which was often referred to.

His temperament generousity to the poor and the oppressed, combined with the passion for beautiful women, led him to spend a fortune and go into debt. He lived for a time from the economic aid of his relatives who wer wealthy aristocrats. Alessandro Tasca Filangeris Cutò died in Palermo in 1943.