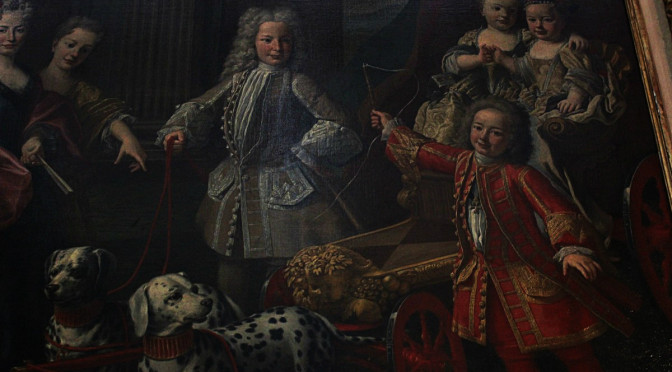 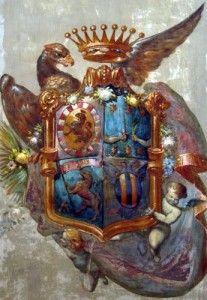 I’ve had the following breakdown in my personal files for quite a while. It has been translated into English, so as I stated, some of the grammar might be a bit off.

The Filangeri family is one of the most illustrious and well known noble families in the history of the Kingdoms, principally under the Norman and Swabian. The family was powerful for many important feudal lordships, military valor and the major offices of the state, and the greater dignity of the Church. Various members of the family have held various titles, including Prince, Duke, Marquis and Earl.

As well, family members have received the Order of Malta since the year 1444, awarded the Golden Fleece and of the most illustrious Orders of Chivalry.

Morris Bock and Rose Filangeri (My Grandmother) (This Picture courtesly of my cousin, Lois Bock DiCosola)

Originally the family name was a nickname taken by the brothers Robert, William, Roger and Tancredi, sons of Angerio (Filli Angerii in Latin).

Founder of the family would have been a certain Roger de Arnes, a noble Norman (nicknamed tichel) that would belong to the Norman ducal family and that of Hauteville. Ruggero d’Arnes would have died November 2 1023.

Arnes had at least three children, who left Normandy and headed for southern Italy; Turgisio, Angerio and Silvano, who would follow Robert Guiscard around 1046.

Turgisio became Count of San Severino Rota, dying in November 1081, and became the founder of the powerful family of Sanseverino. In 1067 during the Council of Melfi II, he was excommunicated by Pope Alexander II for embezzling property belonging to the archbishop of Salerno, together with two other Norman Guglielmo d’Altavilla and Guimondo de Moulins.

Me and my grandmother, Rose Filangeri, circa 1966

Angerio, a valiant warrior and part of the followers of Robert Guiscard in Calabria, received land in Quarry and Nocera. He died in April, 1104, and was buried in the church of Cava de ‘Tirreni.

The four sons of Angerio were honored in the name of the famous father, giving rise to the family of Filangieri.

The last of the brothers, Tancredi is mentioned as belonging to the list of major Norman barons present at Palermo at the coronation of Roger II of Sicily in 1130.

In the first half of the thirteenth century, Riccardo Filangieri, lord of Pozzuoli, was Marshal of the Imperial Kingdom of Sicily (under the domination of the Hohenstaufen), and of the Holy Roman Empire, under the King-Emperor Frederick II , eventually taking part in the Sixth Crusade in 1228 with 500 knights of his retinue. In 1229 he became Governor of Jerusalem. In 1235 he was appointed Bailiff of the Kingdom of Jerusalem. 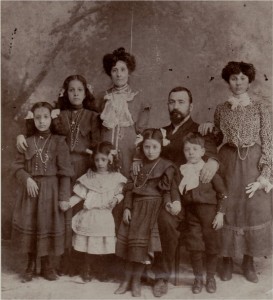 Five generations of my family. I’ve been told my grandmother is the one in the white dress.

Riccardo Filangeri II, Count of Marsico, betrayed King Charles I of Anjou and participated in the conspiracy by Giovanni da Procida to facilitate the arrival of Conrad of Swabia after the battle of Tagliacozzo (1268) were he confiscated all the goods.

Jordan Filangieri, appointed in 1232 as Imperialis Marescalcus, married the sister of Aldunio de Candida in 1234, which him gave the fiefs of Candida and Lapine, in the province of Avellino. On the death of Jordan, the fief of Candida went to his son Aldoino, which took its name from the branch Filangieri de Candida.

In 1330 Philip Filangieri entered the government of the estate and in 1340 took over Arianiello, Parolise, Irpinia Salza, S. Potito, Salsola, Manocalzati, S. Barbato and Pratola Serra, forming the Barony of Candida.

The Candida or Candida Filangieri obtained the baronies of Cancellara and Santacroce, as well as Benevento, Nola, Trani and Lucera.

The Candida Lucera gained the title of Count and Count Antonio, patrician of Lucera, the grandson of Helen Gonzaga, was authorized in 1859 to use the double surname Candida Gonzaga. In the same year, the House was allowed to resume the ancestral surname Filangieri.

The Neapolitan branch of Filangieri, then Filangieri Candida Gonzaga, was attached to the Seats of the Neapolitan Patriciate Capuana and Nest and in 1800 entered in the Golden Book of Napoletano, in the branches of Arianello and Satriano. 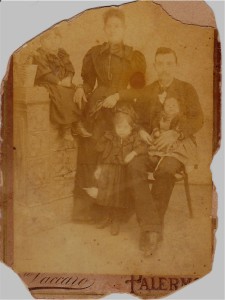 Picture of my Filangeri relatives, taken at the turn of the 20th century

The county of Avellino Filangieri was defended by James I, who was appointed Count of Avellino in 1382, after a long and exhausting siege to the castle of Avellino. However in 1418, the enactment of the Pragmatic Filangeria, issued in Castelnuovo di Napoli in Naples on January 19, 1418 by the Royal Commission, chaired by the Chancellor of the United Marino Boffa and the judges of the High Court of the Vicar, including Charles Gaeta , also laying the signature of Queen Giovanna II, the county returned to Filangieri de Candida, in the person of Catherine (1399 † 1433), wife of the powerful Sergianni Caracciolo.

The latter was treacherously murdered in 1432 with the complicity of his mistress the Queen Giovanna II, who vented his anger by confiscating all the property of the wife of her former lover and imprisoning his son Troiano Caracciolo.

The Countess of Avellino took refuge in his castle in Caivano, and only thanks to the intervention of the Prince of Taranto, del Balzo Orsini , was returned to the County of Avellino; later, August 29, 1432, Troiano was freed in exchange for the delivery of ‘immense treasure amassed by Sergianni Caracciolo in Melfi. It also stipulated an agreement restitution of lands, castles, and other assets of the deceased, to guarantee a woman hostage Catherine had to offer to the Queen.

In 1436, Troiano Caracciolo del Sole was reinstated by Queen Isabella, mother of Robert of Anjou, in the county of Avellino in 1441 and the duchy of Melfi.

Catherine Filangieri Candida died in Naples in 1447 and rests in peace in the tomb placed in the Benedictine sanctuary of Montevergine.

Giovanni Gaetano Filangieri (Lapio 1676 † San Sebastiano al Vesuvio, 1750), Lord of Lapine, Rogliano and Arianello, Patrizio Napoletano aggregate to the Seat of Capuana in 1685, was decorated in 1724 with imperial diploma of Charles VI , with the title of Prince of Arianello, one of the three Houses that formed the ancestral estate of Lapine, where the Barons included several generations of Filangieris and held sway over the civil and criminal jurisdiction with adjoining Mastrodottia.

The Baronial mansion of Lapio in Naples served as the residence of Filangieri. It was on the corner between Via Atri and via the Courts. Don Giovanni Gaetano was married in 1700 to Anna Maria de Ponte , the daughter and heir of the Dukes of Flumeri Don Caesar and Joan Severino .

Don Cesare Filangieri, according to the prince of Arianiello, married in 1740 Dona Maria Montalto of the Dukes of Frignano.

The third son of Don Caesar Filangeri and Marianna woman was Don Gaetano Filangieri (Vico Equense Cercola 1752 † 1788), who embarked on a military career as a young man. He became First Lieutenant of the Infantry and then an officer in the Royal Naval Volunteer Corps.

He devoted himself to the study, and in 1775 he graduated in law. He was a contemporary of Giambattista Vico, and a friend and correspondent of Goethe.

He wrote numerous works, including “General rules” in 1780, “The law and the criminal procedure” in 1783, “On Education” in 1785. “The Science of Legislation,” written at the age of 28, gave him international fame in the field of legal philosophy and theory of law.

The text was translated into English, French, German, Spanish, and became one of the models that Benjamin Franklin used for the drafting of the U.S. Constitution and point of reference for Enlightenment intellectuals, proponents of the Neapolitan Republic of 1799 .

In 1782 he was Commander of the Priory of St. Anthony Sarno for the Constantinian Order of Saint George. In 1787 Ferdinand IV of Bourbon appointed him Director of the Supreme Council of Finance.

In 1783 he married the Countess Frendel Carolina, daughter of Count George Cornelius, Maid of the Queen of Naples and later guardian of Maria Luisa of Bourbon, Princess of Naples and Sicily.

In 1788, together with his wife Carolina, Filangieri went to Vico Equense in the feudal castle, a guest of her sister Teresa, who had married Philip Fresh Ravaschieri. Here he became ill and July 21, 1788 he gave his soul to God

He was buried in the nearby Cathedral of SS. Announced together with his wife. Charles, the youngest son of the jurist Gaetano, was born in Cava dei Tirreni May 10, 1784. He joined the army at Austerlitz Napoleon and fought valiantly, suffering numerous injuries. In 1806 he participated in the siege of Gaeta, with the rank of Captain on the orders of Joseph Bonaparte.

In 1808, during the conquest of Spain, he distinguished himself in the grip of Burgos. He was appointed by Joachim Murat Colonel and then General, after his heroic conduct in the Russian campaign. With Murat, he fought in Italy against the Austrians and was seriously injured. In 1810, to defend the honor of the Neapolitan troops, he challenged a duel with the French general Francois Franceschi. Immediately after the successful restoration of the Bourbons, he retired from the army.

In 1817 he was declared heir by his uncle Philip Ravaschieri Fieschi and King Ferdinand I in 1819 decorated him with the titles of Prince of Satriano and Duke of Cardinale, preserving the rank of General. Assumed command of the City Watch of Naples, during the riots of 1820-21.

Subsequently, he retired to private life but, in 1848, was reinstated by King Ferdinand II of Bourbon , who sent him to Sicily to defeat the insurgency in Sicily, with the rank of Lieutenant. Agata He married Donna Maria Moncada, daughter of Don Giovanni Luigi , Prince of Paternò and Donna Joan Grove Dukes of Belvedere.

In 1849 he was awarded the title of Duke of Taormina in 1859 and Chairman of Ministers in Naples.

The Prince spent part of the past few years, assisted by his daughter Teresa, at his villa in Pozzuoli. He died at St. Giorgio a Cremano in 1867, at the venerable age of eighty years, his bones rest in peace in the impressive tomb erected in the church of S.Mary Piedigrotta in Naples. On the death of Charles, the son of Gaetano Filangieri (Naples, 1824 † ibid., 1892), inherited the titles of Prince of Satriano and Duke of Taormina.

He devoted himself completely to the study, the collection, cataloging and preservation of artistic and historical works. He founded the Museum in Naples Filangieri in the Renaissance palace of the family Como , who donated it to the city.

He was Vice President of the Society of History Patria, Director and Chairman of the Heraldic Museum he founded.

Afterward came Prince Allessandro Tasca Filangeri-Cuto. You can read more about in on his special page. He came to the United States in the early 1900s, but was not the first Filangeris to come here.

In the early 1900’s, five siblings (Antonio, Elviro, Eduardo, Mario, and Providenza Filangeri) emigrated from Palermo, Sicily to New York City. They eventually settled into the Bensonhurst area of Brooklyn, NY. These are the American fore-bearers of the existing Filangeris in the U.S. Antonio was my grandfather. 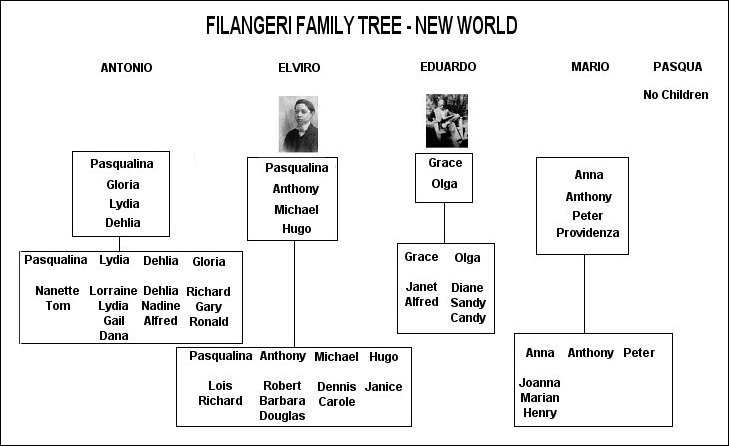 There are also connections to the families Cuto, Mastrogiovanni, Lampadusa and more. Click around, and I hope you come back! Enjoy!