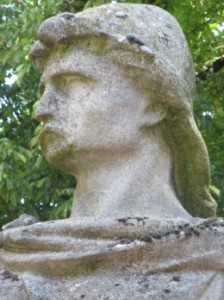 The family of the Hauteville (also known as Altavilla) was a Baronial Norman family from the Cotentin which rose to prominence in Europe, Asia, and Africa through its conquests in the Mediterranean, especially southern Italy and Sicily. They also participated in the Norman conquest of England.

The familial origins come from the Norsemen Vikings who had settled in Normandy in the 10th century. Vikings are of Germanic descent and were based in Scandinavia, from the late 8th to the mid-11th centuries. The period from the earliest recorded raids in the 790s until the Norman conquest of England in 1066 is commonly known as the Viking Age of Scandinavian history. The Normans were descended from Danish and Norwegian Vikings who were given feudal overlordship of areas in northern France (the Duchy of Normandy) in the 10th century

Rollo, a Norse nobleman of Norwegian or Danish descent who was founder and first ruler of the Viking principality which soon became known as Normandy, was from the Hauteville family. Norwegian and Icelandic stories identify Rollo with Ganger Hrolf, a son of Rognvald Eysteinsson, Earl of More in western Norway. Rollo (c. 846 – c. 931), baptised Robert and sometimes referred to as “Robert I.” His descendants were the Dukes of Normandy, and following the Norman conquest of England in 1066 at the Battle of Hastings, Kings of England. 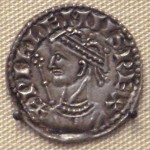 English coin of William the Conqueror

Rollo is the great-great-great-grandfather of William the Conqueror, the Duke of Normandy. The Duchy of Normandy was created in AD 911 by King Charles III “the Simple” of France specifically for Rollo. In 1051 the childless King Edward of England chose William as his successor to the English throne. William the Conqueror was crowned England’s King on Christmas Day at Westminster Abbey 1066.

An interesting side note, William the Conqueror’s mother was a woman known as Herleva, the daughter of a tanner and mistress to William’s father, Robert the Magnificent, Duke of Normandy.

She was born c.1003 in Falaise, Normandy and her father was Fulbert, who belonged to the burgher class. In 1027/1028 she bore fruit of the relationship with Robert and William was born.

After the death of William the Conqueror, his eldest son, Robert Curthose, became Duke of Normandy while a younger son, William Rufus, became King of England. William II was succeeded in 1100 as King of England by another brother, William the Conqueror’s youngest son, Henry I. In 1106, Henry deposed Robert, and claimed both titles, uniting the the titles of Duke of Normandy and King of England. Thus, through William, Rollo is an ancestor of the present-day British royal family, as well as an ancestor of all current European monarchs, including the Filangeri family.

With his second wife, Fressenda (or Fredesenda), he had seven more sons and at least one daughter. The sixth son of Tancred and the eldest by his second wife was Robert Guiscard de Hauteville, Count of Apulia (1057), then Duke of Apulia and Sicily (d. 1085) 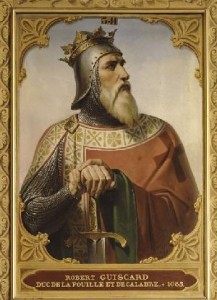 Robert Guiscard left Normandy with five mounted riders and thirty followers on foot. Upon arriving in Langobardia in 1047, he became the chief of a roving robber-band. Guiscard was granted a fief by his brother Drogo, who had just finished campaigning in Calabria.

This fief was the command of the fortress of Scribla. Guiscard moved to the castle of San Marco Argentano (after which he later named the first Norman castle in Sicily, at the site of ancient Aluntium).

Guiscard soon rose to distinction. The Lombards turned against their erstwhile allies, and Pope Leo IX determined to expel the Norman freebooters. His army was defeated, however, at the Battle of Civitate sul Fortore in 1053 by the Normans, united under Humphrey. Humphrey commanded the centre against the pope’s Swabian troops. Early in the battle Count Richard of Aversa, commanding the right van, put the Lombards to flight and chased them down, then returned to help rout the Swabians. Guiscard had come all the way from Calabria to command the left.

His troops were held in reserve until, seeing Humphrey’s forces ineffectually charging the pope’s centre, he called up his father-in-law’s reinforcements and joined the fray, distinguishing himself personally, even being dismounted and remounting again three separate times, according to William of Apulia. Honored for his actions at Civitate, Guiscard succeeded Humphrey as count of Apulia in 1057. In company with Roger, his youngest brother, Guiscard carried on the conquest of Apulia and Calabria, while Richard conquered the principality of Capua.

Soon after his succession, in 1058, Guiscard married Sichelgaita, the sister of Gisulf II of Salerno.

The Papacy and the Roman nobility resolved to recognize the Normans and secure them as allies. At the Council of Melfi, on 23 August 1059, Pope Nicholas II invested Guiscard as duke of Apulia, Calabria, and Sicily.

Guiscard, now “by the Grace of God and St Peter duke of Apulia and Calabria and, if either aid me, future lord of Sicily”, agreed to hold his titles and lands by annual rent of the Holy See and to maintain its cause. In the next twenty years he undertook a series of conquests, winning his Sicilian dukedom.

In 1066, more of Guiscard’s family arrived in Sicily, including Angerio, who was accompanied by his brothers, Turgisio and Silvanus. Angerio was also known as “Tichel”, and was part of the Hauteville (also known as Altavilla) family He was a descendant of the Dukes of Normandy. Angerio was the founder of the Filangieri (his descendants ‘Filii Angerii’ meaning ‘sons of Angerio.’

The Filangeri link to the British Royal Family is in Prince William’s 31st ancestral generation to Tancred, who is also linked to the Sicilian Royal Family: 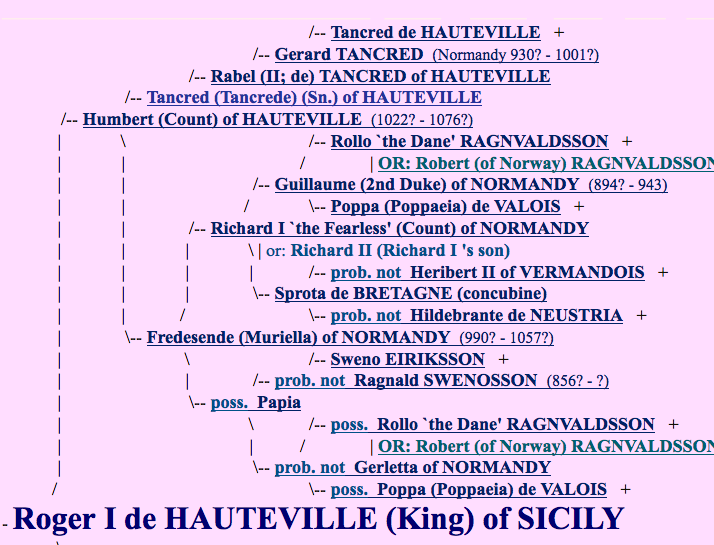 The pedigree number for Tancred on the listing of Prince William (Windsor) is:

Also, from the lineage of Rollo comes Crispin, Lord of Arnes, whose son was Roger Arnes (Roger of Arnes). Roger’s sons include:

Turigisio – founder of the Sanservino Dynasty one of the historical families most famous in the Kingdom of Naples and all of Italy, having 300 strongholds, 40 counties, nine marquisates, twelve duchies and ten principalities primarily distributed in Calabria, Campania, Basilicata, and Apulia. Among its members, one finds many cardinals, viceroys, marshals and condottieres

Silvano – Founder of the Gravina Dynasty, which include the Counts of Gravina (later the Dukes of Gravina), who were the medieval rulers of Gravina di Puglia, in the old Kingdom of Sicily and the Kingdom of Naples. The county was granted to Francesco Orsini in 1417, who was appointed Duke in 1436. His descendant holds the title today, and represents the remaining branch of the Orsini family. Among the Orsini Dukes, Pietro Francesco resigned his temporal dignities in 1667 to become a Dominican, and subsequently ascended the papal throne as Pope Benedict XIII.

5,646 thoughts on “Filangeri Family Ties: The Papacy, Duke of Normandy and British Monarchy”