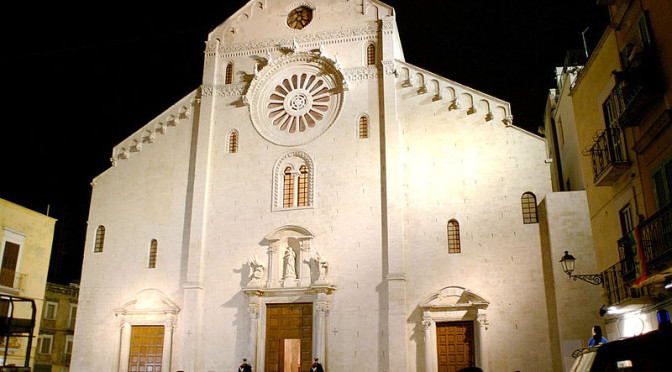 Metropolitan Archdiocese of Bari–Bitonto, Italy is an archdiocese situated in the province of the same name, in Apulia, Southern Italy. Anciently called Barium, it fell into the power of the Romans after the war with Pyrrhus, retaining, however, its autonomy.

According to a local tradition, St. Peter himself preached the Gospel there and consecrated the first bishop.

The first known Bishop of Bari was Gervasius, who, in 347, assisted at the Council of Sardica. In 530 Bishop Peter held the title of Metropolitan under Epiphanius, Patriarch of Constantinople. In 780 Bishop Leontius was present at the Seventh Oecumenical Council, the Second of Nicaea. In the ninth century the Saracens laid waste Apulia, destroyed the city of Canosa (Canusium) and captured Bari.

In 841, however, the Byzantine army reconquered Bari, and in 844 St. Angelarius, Bishop of Canosa, then in ruins, brought to Bari the relics of Sts. Rufinus, Memorus, and Sabinus, which he had rescued from the ruins. Pope Sergius II conferred on him the title of Bishop of the two dioceses of Bari and Canosa, a title which the Archbishops of Bari retain to the present time.

In 933 Pope John XI granted the Bishops of Bari the use of the pallium. It seems that the Bishops were dependent on the Patriarch of Constantinople until the tenth century. Giovanni II (952) was able to withdraw from this influence, refusing to accept the prescriptions of the patriarch concerning liturgical points. All connection was finally severed in the eleventh century, and Bari became a direct dependency of Rome.

Archbishop Bisanzio (1025) obtained form the pope the privilege of consecrating his suffragans; he also began the construction of the new cathedral, which was continued by his successors, Nicolo (1035), Andrea (1062), and Elia (1089), the last-named a member of the Benedictine Order. 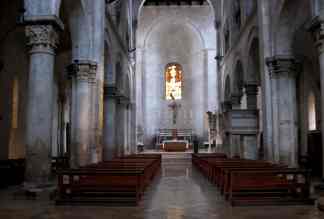 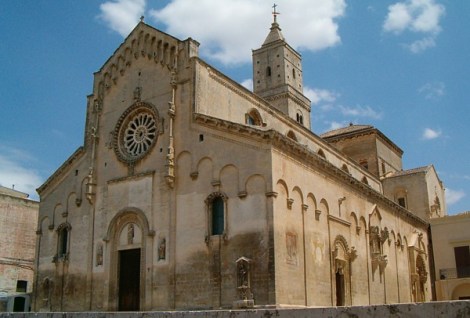