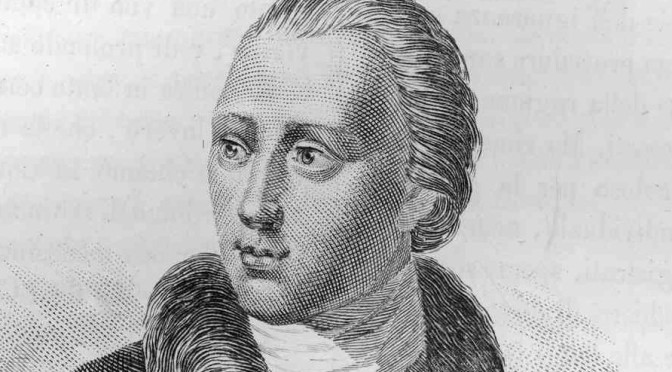 The man who wrote the US Constitution? 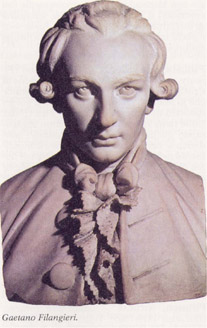 As seen in “Around Napoli.”

It is certainly an overstatement that the Constitution of the United States of America was written in a beautiful old building—still called “the castle”—in Vico Equense, a small town on the Bay of Naples about halfway out the Sorrentine peninsula, but that’s what citizens of that hamlet delight in telling visitors. Viewed charitably, it’s a good story—a very human one with just that kernel of historical fact that piques one’s interest. It also provides a small introduction to the person of Gaetano Filangieri, a leading figure of the Neapolitan Enlightenment, a philosophical movement that thrived in the mid-and late 18th century.

Filangieri was born in Naples in 1752. He gained early favor at the court of the Bourbon monarch, Charles III, King of Naples, by virtue of his Political Reflections, in which he defended the king’s enlightened reforms of the legal system. He is best remembered today, however, for his La Scienza della legislazione (The Science of Legislation) a work he started in 1780 and planned as seven volumes but which remained unfinished in the middle of the fifth volume upon his death in 1788.

The Science of Legislation was, in short, a recipe for creating a just society based on reason.  It ranged from rules on how laws should be formulated to economics to education and societal ethics. This remarkable work was an outgrowth of the French enlightenment and was inspired by the principle that reason should be at the core of a just legal system, and that the measure of the just society was how well it dealt with the social and economic realities of that society. It pinpointed the societal split between the landed few who had much and the landless many who had nothing—a potentially ruinous situation for modern nations, which had to face increasing population, inefficient agricultural output and the beginnings of industry.

Filangieri may not have been the John the Baptist of class warfare that later Marxists like to claim, but he was a formidable advocate of reform, calling for a large class of small property owners, universal public education and equality before the law. He wanted unlimited free trade and the abolition of  medieval institutions, which impeded production and national well-being. He called for freedom of the press and toleration in juridical and social matters, ideas that would later mark the age of post-absolutist Europe. These ideas certainly had their philosophical origin in the French Enlightenment but they remained in that lofty arena of philosophical debate until Filangieri wrote down the specifics—how they laws themselves would  actually look on paper. The Science of Legislation was a masterpiece of the Italian Enlightenment—and in 1784 also put on theIndex, the Roman Catholic Church’s list of banned books.

The Science of Legislation enjoyed an immediate success and was translated into other European languages almost immediately. Though the tone of the entire work was one of reasoned reform and not violent revolution, it was on the must-read list of the Jacobins as they prepared the French Revolution of 1789; also, it was an inspiration to the later Neapolitan Revolution of 1799.

Filangieri’s view of events in the New World, specifically, the American Revolution, underwent some interesting changes. Like many Europeans, he saw America from a colonizer’s point of view. In The Science of Legislation he frequently refers to the entire western hemisphere—all of the Americas—as “Europe’s farm”. His main concern for social equality and justice in the Americas seems to have been a pragmatic one; this is, if Europe abused her colonies in the New World, they might rebel, fall away and become independent, depriving Europe of a great resource. Thus, good government was good for everyone—fair to the governed and profitable to those who govern.

He expressed those views in 1780 when the first part of The Science of Legislation was published and General Washington’s forces had not yet spent their rough winter at Valley Forge. Yet, one year later, the American revolution was over and Filangieri—like many other children of the French Enlightenment—fell under the spell of the “American myth,” a place where “Life, Liberty and the Pursuit of Happiness” had just swept the day. The French historian, J.J. Godechot, has written:

Filangieri initiated an exchange of letters with Benjamin Franklin, sending him a copy of  the finished portions of The Science of Legislation, at which point Franklin ordered copies of the remaining volumes as they would be published. Filangieri also mentioned to Franklin the idea of emigrating to the new nation and, specifically, to that enlightened center of the new nation, Philadelphia. From his letter of December 2, 1782, to Franklin:

The extent of the exchange of letters between Filangieri and Franklin is documented in Antonio Pace’s authoritative Benjamin Franklin and Italy(see bibliography, below.) Because some of that correspondence has not survived, it is impossible to be precise about all the details. Yet, in the words of Pace, “…[what has survived] allows us to piece together almost completely… [the nature of the correspondence]…”.

This 1805 engraving of Franklin is by J. Thompson,
after a painting by J.A. Duplessis. 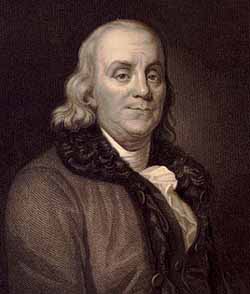 Filangieri and Franklin exchanged letters from 1782 to 1787. On the one hand, Franklin was the American Rousseau—scientist, philosopher, elder statesman, charmer and absolute toast of Paris during his term as US ambassador to France. On the other hand, Filangieri was the young, enthusiastic social reformer, eager to flaunt his considerable knowledge and, as well, just as eager to reap praise from the American, whom he quite obviously worshipped.

After an exchange of gifts (including copies of The Science of Legislation for Franklin) and after Filangieri had semi-invited himself to America, Franklin cautiously discouraged Filangieri from jumping into such a risky venture without really knowing what he might be getting into. To that end, Franklin suggested that the young man jockey for position in whatever diplomatic or economic relations might be about to open up between the new United States of America and Filangieri’s Kingdom of Naples. Filangieri saw the wisdom of that suggestion and agreed to look into it. Franklin then sent Filangieri some French translations of the various constitutions of the individual states in the US. Filangieri thanked him, commenting that they seemed too restrictive in terms of allowing the will of the people to flourish!

Filangieri died of tuberculosis in 1788 at the ridiculously young age of 35. That was, however, long enough to see the inadequate Articles of Confederation fail to regulate the new “haven of virtue and land of heroes”. And it was long enough to see his pen-pal, Benjamin Franklin—in spite of great age and infirmity—head the Pennsylvania delegation to the hopeful Constitutional Convention of 1787. Franklin sent Filangieri a copy of a draft of the new Constitution, appending the note, “…it may be a matter of some curiosity to you, to know what is doing in this part of the world respecting legislation.” It is not clear whether Filangieri received and read that before his death. After Filangieri died, his wife sent Franklin a poignant note, relating that her husband had left her nothing but the “memory of his virtues”. Here, again, we don’t know that Franklin got the note before he, himself, passed away.

Filangieri did not see the adoption of the Constitution of the United States in 1789.  He also  missed the cataclysmic French Revolution of the same year as well as the brief  excursion into republicanism in his own Kingdom of Naples in 1799; thus, whatever his opinions might or might not have been on these events is speculation. Missing the short-lived republican overthrow of the Bourbons in 1799 was probably just as well. He most certainly would have joined the Republic and wound up on the gallows. More than one Bourbon judge at the royalist trials of the Neapolitan rebels lamented that Filangieri was no longer around to get what he deserved.

Well, he does deserve his reputation as an enlightened reformer. Did he really have anything to do with the substance of the US Constitution? I don’t know—and that puts me in pretty good company. It is true that Franklin ordered a lot of copies of everything that Filangieri wrote, so he was obviously doing something with them besides reading them, himself—perhaps handing them around to his friends as they beat themselves up over how to formulate a workable document that would govern a new nation. (There was no integral English translation of the Science of Legislation until 1806, but bits and pieces of it are bound to have been in circulation well before that.) So, if my friends in Vico Equense want to believe that Gaetano Filangieri burned the midnight oil in “the castle” turning out drafts of the US Constitution to pass on to Franklin who then informed the Convention—then, who am I  meddle with a good story?