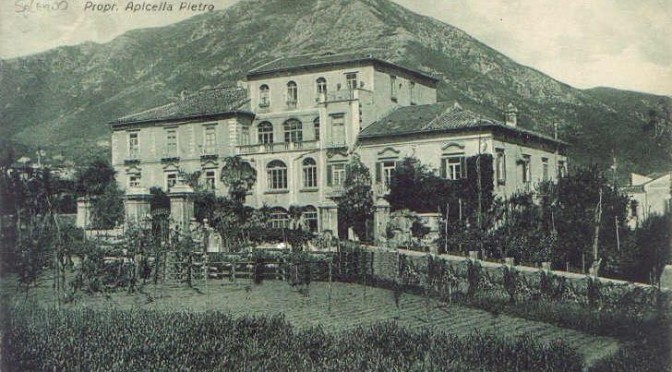 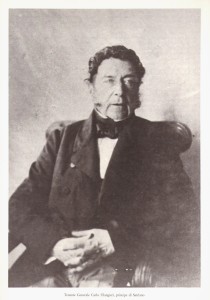 Born at Cava de’ Tirreni, near Salerno, at the age of fifteen Filangieri decided on a military career, and having obtained an introduction to Napoleon Bonaparte, then first consul, was admitted to the Military Academy at Paris. In 1803, he received a commission in an infantry regiment, and took part in the campaign of 1805 under General Davout, first in the Low Countries, and later at Ulm, Maria Zell and Austerlitz, where he fought with distinction, was wounded several times and promoted.

He returned to Naples as captain on Masséna’s staff to fight the Bourbons and the Austrians in 1806, and subsequently went to Spain, where he followed Joseph Bonaparte in his retreat from Madrid. After having slain General François Franceschi-Losio in a duel[1] he was sent back to Naples; there he served under Joachim Murat with the rank of general, and fought against the Anglo-Sicilian forces in Calabria and at Messina. On the fall of Napoleon, he took part in Murat’s campaign against Eugène de Beauharnais, and later in that against Austria, and was severely wounded at the battle of the Panaro (1815).

On the restoration of the Bourbon king Ferdinand IV (I), Filangieri retained his rank and command, but found the army utterly disorganized and impregnated with Carbonarism. In the disturbances of 1820, he adhered to the Constitutionalist party, and fought under General Pepe against the Austrians. On the re-establishment of the autocracy, he was dismissed from the service, and retired to Calabria where he had inherited the princely title and estates of Satriano.

In 1831, he was recalled by Ferdinand II and entrusted with various military reforms. On the outbreak of the troubles of 1848, Filangieri advised the king to grant the constitution, which he did in February 1848, but when the Sicilians formally seceded from the Neapolitan kingdom Filangieri was given the command of an armed force with which to reduce the island to obedience. On September 3, he landed near Messina, and after very severe fighting captured the city. He then advanced southwards, besieged and took Catania, where his troops committed many atrocities, and by May 1849, he had conquered the whole of Sicily, though not without much bloodshed.

He remained in Sicily as governor (the exact Italian title was Luogotenente generale dei reali domini al di là del Faro, meaning Lieutenant-general of the royal domains beyond the Lighthouse) until 1855, when he retired into private life, as he could not carry out the reforms he desired owing to the hostility of Giovanni Cassisi, the minister for Sicily. On the death of Ferdinand II (May 22, 1859) the new king Francis II appointed Filangieri premier and minister of war. He promoted good relations with France, then lighting with Piedmont against the Austrians in Lombardy, and strongly urged on the king the necessity of an alliance with Piedmont and a constitution as the only means whereby the dynasty might be saved. These proposals being rejected, Filangieri resigned office.

In May 1860, Francis at last promulgated the constitution, but it was too late, for Garibaldi was in Sicily and Naples was seething with rebellion. On the advice of Liborio Romano, the new prefect of police, Filangieri was ordered to leave Naples. He went to Marseilles with his wife and subsequently to Florence, where at the instance of General La Marmora he undertook to write an account of the Italian army. Although he adhered to the new government he refused to accept any dignity at its hands, and died at his villa of San Giorgio a Cremano near Naples on 9 October 1867.

Filangieri was a very distinguished soldier, and a man of great ability; although he changed sides several times, he became really attached to the Bourbon dynasty, which he hoped to save by freeing it from its reactionary tendencies and infusing a new spirit into it. His conduct in Sicily was severe and harsh, but he was not without feelings of humanity, and he was an honest man and a good administrator.

His biography has been written by his daughter Teresa Filangieri Fieschi-Ravaschieri, Il Generale Carlo Filangieri (Milan, 1902), an interesting, although somewhat too laudatory volume based on the general’s own unpublished memoirs; for the Sicilian expedition see V Finocchiaro, La Révoluzione siciliana del 1848-49 (Catania, 1906, with bibliography), in which Filangieri is highly criticised.