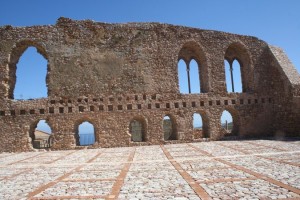 San Marco is 87 km from Messina and 135 west from Palermo east. It is located on the summit of Monte Castro at 540 meters above sea level, on the sides of the valleys of the rivers Rosemary and Platanà, behind the mountain range Nebrodis .

Its foundation dates back to the fourth century BC and during the period of domination by the Greeks it was a flourishing center called Alontion and minted its own currency.

During the Punic Wars it was conquered by the Romans, who proclaimed it a municipium autonomous, renaming it Aluntium and, in this period, the city experienced an artistic and economic development of which there is still evidence in the archaeological monuments and a wide epigraphic literature. It will be mentioned by Pliny and by Cicero in the famous trial of Verres , who seized the treasures of several Sicilian towns.

With the fall of the Western Roman Empire, Aluntium before it was conquered by the Byzantines, who called Demenna, and then by the Arabs who surrounded the town with walls and made ​​it the administrative center of a vast political area of Sicily called Val Demon .

The Normans defeated the Arabs, then represented the central government and renamed it in honor of Saint Mark the Evangelist, and in memory of the first city conquered in Calabria. From the eleventh century it was the domain of Robert Guiscard of Hauteville, who chose it as a starting point and as a military garrison for the conquest of Sicily. In this period the monastery of the Benedictine nuns was built, with the adjoining church of the Holy Savior.

Later it belonged to several noble families until September 2nd 1398, when King Martin I of Sicily granted the lordship of St Mark Abbo Filangeri. The Filangeris ruled the city until the end of feudalism in Sicily . Under the control of the family Filingeri, San Marco became a center of economic and cultural well-developed and was enriched with many churches.

During the Filangeri government some illustrious personalities were born, such as Rebiba Scipio, who became cardinal, who was born a Filingeri in the district of St. Basil February 3rd 1504. Also,  Jerome Lanza, hermit and founder of the hermits of Mount Pellegrino which belonged to the young Benedict Manasseri from San Fratello .

On 30 July 1862 the City Council of San Marco resolved to recall the ancient origins of the center. They resolved to add the name Alunzio to St. Mark, hence the name of Alunzio San Marco d’Alunzio.

Remains of the ancient Greek city, in the lower part, some structures of the Temple of Hercules. Also present from the Byzantine era is a Greek cross from the church of San Teodoro, and the Annunciation of the paleo-Christian system.

Of the original Norman structure of the Church of the Holy Savior, from the twelfth century, remains within columns along with stone capitals decorated with Byzantine motifs. It is a Greek cross and decorated with geometric designs.

Of particular interest are the ruins of the Norman castle and archaeological finds from various periods (greek, Roman, Byzantine, Arab, Norman, Aragon), in the Museo Comunale San Teodoro and St. Joseph Parish Museum.